In October 2020, the Edinburgh Parkinson’s Lecture was, for the first time since 2012, presented virtually and hosted by the Royal College of Physicians of Edinburgh.

Attendance more than doubled as a result of the move to online streaming and the facilities we were able to provide. This meant we were able to expand the reach of the event, far beyond Edinburgh to an international audience.

The College has supported this event over a number of years and inclusivity is a key requirement, due to 60% of attendees being affected by Parkinson’s disease. The change to a virtual event led to even more people being able to join us.

We spoke with Professor David Melton, one of the primary organisers of the annual lecture and his experience of holding the Edinburgh Parkinson’s Lecture online for the first time.

What were the highlights of your event?

For me the highlight was the great Q&A session that followed the lecture. The Slido system worked well allowing us to ask the speaker the most popular questions. It went so well that we allowed it to run over time.

Did you achieve your event objectives?

Yes! The Edinburgh Parkinson’s Lecture attracts internationally renowned experts to inform and educate a live audience and to review progress in the fight against Parkinson’s. This year, for the first time the Lecture took place as a live streamed online event and was watched by more than 800 people, mostly from Scotland and the rest of the UK, but also from continental Europe, America and Asia. People affected by Parkinson’s made up 60% of the audience.

Why did you choose the Royal College of Physicians of Edinburgh?

RCPE has always been our first choice for a live Edinburgh Parkinson’s Lecture. The refurbished conference centre facilities are good for our audience, many of whom have reduced mobility. When we were forced to cancel this year’s in-person event, RCPE told us about their online offering. Originally we had thought that we might organise the online lecture ourselves. Looking back, I am relieved that we didn’t!

Could you describe what it was like to work the venue team?

The team were very helpful and spent a lot of time with us online providing training in how to use the recording, streaming and Slido systems. I had a clear idea of what I wanted and they were always quick to respond to my many queries.

How did pivoting to a virtual event impact your attendance?

We had a huge online audience that we were delighted about. Much larger than the 250 we usually receive for a live event at RCPE. So we were able to reach out to more people affected by Parkinson’s than ever before.

Find out more about our virtual and hybrid event packages here. 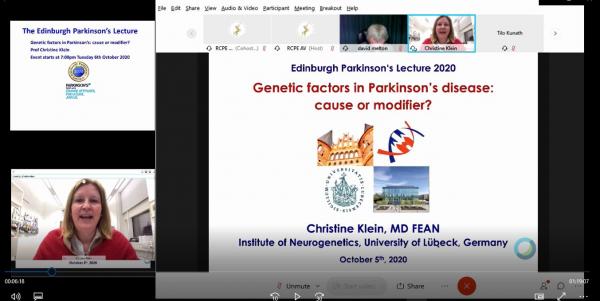